Have a little potato with your catsup

- September 02, 2013
It was a momentous day in Collinsville this past week when the giant Idaho baked potato stopped to visit the World's Largest Catsup Bottle. On Wednesday afternoon, the potato and the catsup bottle met up – or at least were in view of each other – when the Big Idaho Potato Tour and the Tater Team rolled into town on a 72-foot-long truck and trailer. Cameras rolled and kids posed as the potato crew handed out souvenir postcards with facts about the giant sprayed-concrete potato. 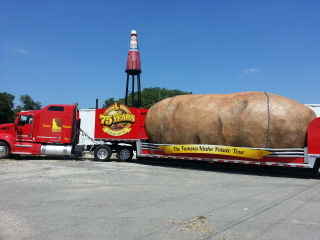 The cross-country road tour is celebrating the Idaho Potato Commission's 75th anniversary. Some hard facts about this potato: (1) If it were a real potato, it would take two years and nine months to bake, or it could make over 1,500,00 french fries. (2) This potato weighs 12,130 pounds and is 28 feet long. (3) It took almost a full year to build the spud in Weiser, Idaho. If anyone just can't get enough, there's a Facebook page and a website: Famous Idaho Potato Tour 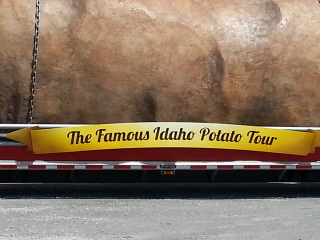 I thought about other huge pieces of roadside kitsch going on tour: “Giant Ball of Twine Visits Stringtown: Traffic Tied up for Hours.” Well, maybe not. From a marketing standpoint, it might have to be a product that inspires mass devotion as in the case of the white potato. When the Potato Tour pulled out of Collinsville, it made its next stop in nearby Glen Carbon at the brand-new Sam's Club. Giant potato, meet giant retailer.
Famous Idaho Potato Tour World's Largest Catsup Bottle