Trip Day #2 - Bonnie and Clyde, the Murder Bordello and more in Kansas

- August 11, 2014
The interstate system bypassed cities and towns in seven Route 66 states, but the interstate bypassed the whole state of Kansas! Good old Route 66 meanders through the very corner of southeastern Kansas – 13 miles in all. It's 13 miles full of interesting sights and stops and one of my favorite stretches. 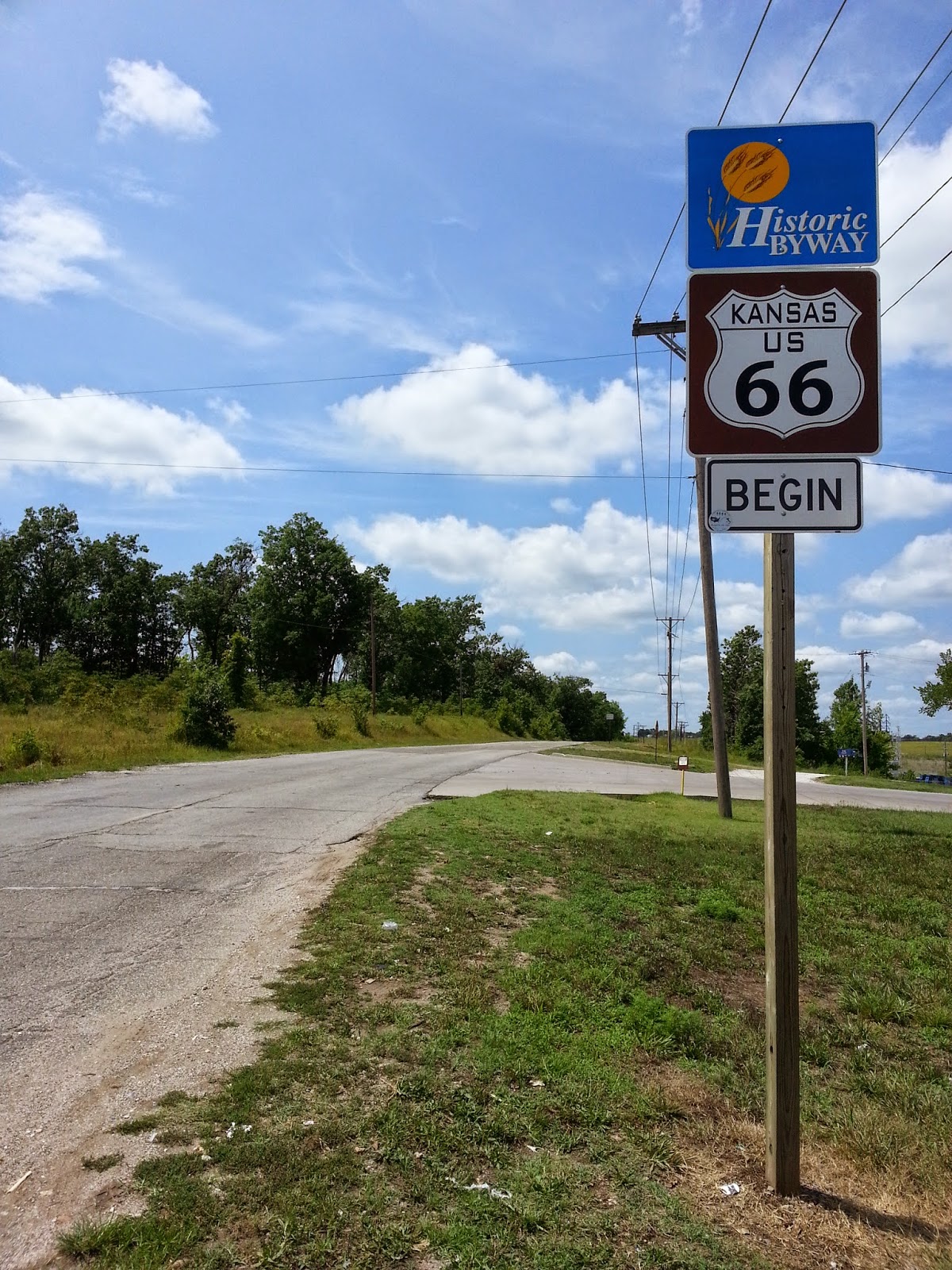 But before I left Joplin, Missouri, this morning, I drove by the apartment on Oak Ridge Drive where the famous shootout occurred in 1933 between the Barrow gang and the Joplin police. Brothers Clyde and Buck Barrow were seriously wounded, but they managed to get away. Two police officers were killed. I'd never gone by the apartment before, and I don't know what I was expecting, but it wasn't this lovely neighborhood. The street that the main house faces is lined with bungalows, Ozark Giraffe, stone cottages, and pretty lawns. The place is on a corner lot, and the apartment with garage faces 34th Street. It was added to the National Register of Historic Places in 2009. 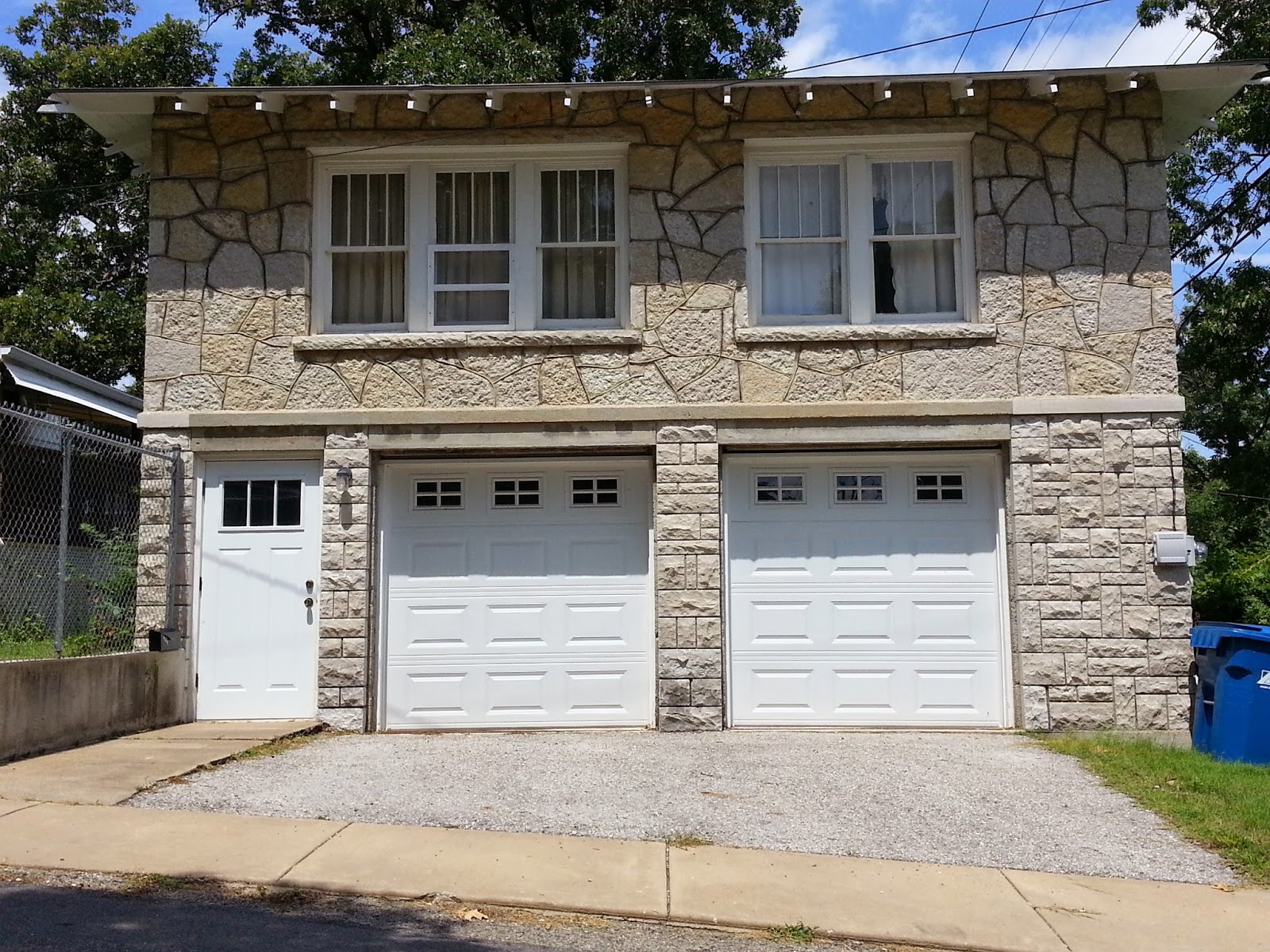 Then it was on to Kansas. Just out of Joplin is a fine segment of older 66 that winds into Galena via a graceful but deteriorating concrete bridge. Galena is turning into a real charmer via numerous restoration efforts. In August 2013, a new mural was unveiled during Galena's evening event as part of the International Route 66 Festival in Joplin. There were so many people filling Galena's main street that night – it might have been the biggest crowd since mining days! The “Murder Bordello” had their “open for tours” sign out today, but I didn't take time – maybe on the way back home. Murder Bordello, you ask? Local legend has it that a madam by the name of Ma Staffleback did away with as many as 50 of the establishment's clients, but historians differ over whether this is the actual location of the murders. But local legend makes for good business, which, after all, Route 66 has always been about. At Cars on the Route (formerly Four Women on the Route, a great restored gas station), a couple little boys were entranced with Tow Mater, the character from the "Cars" movies. 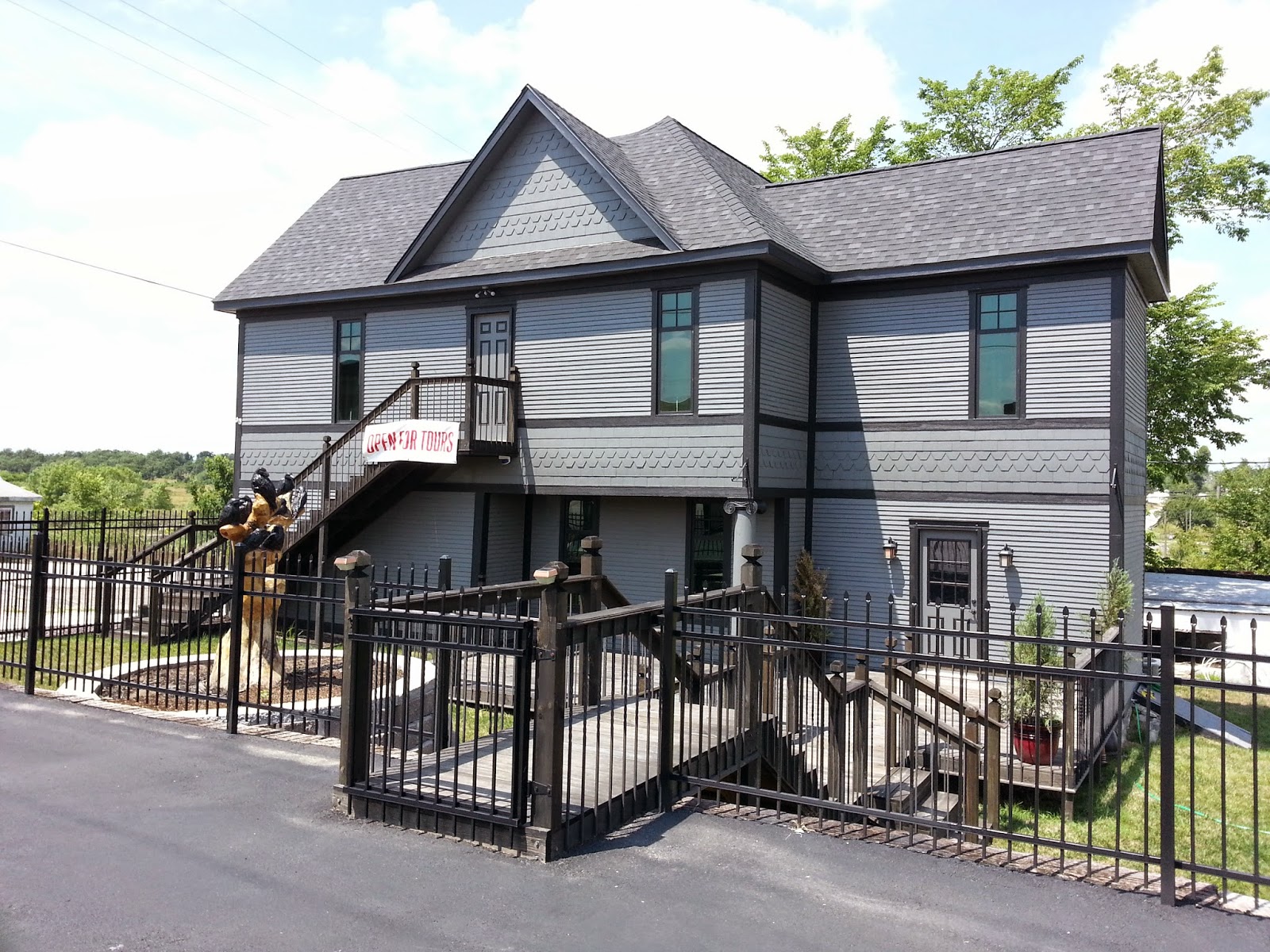 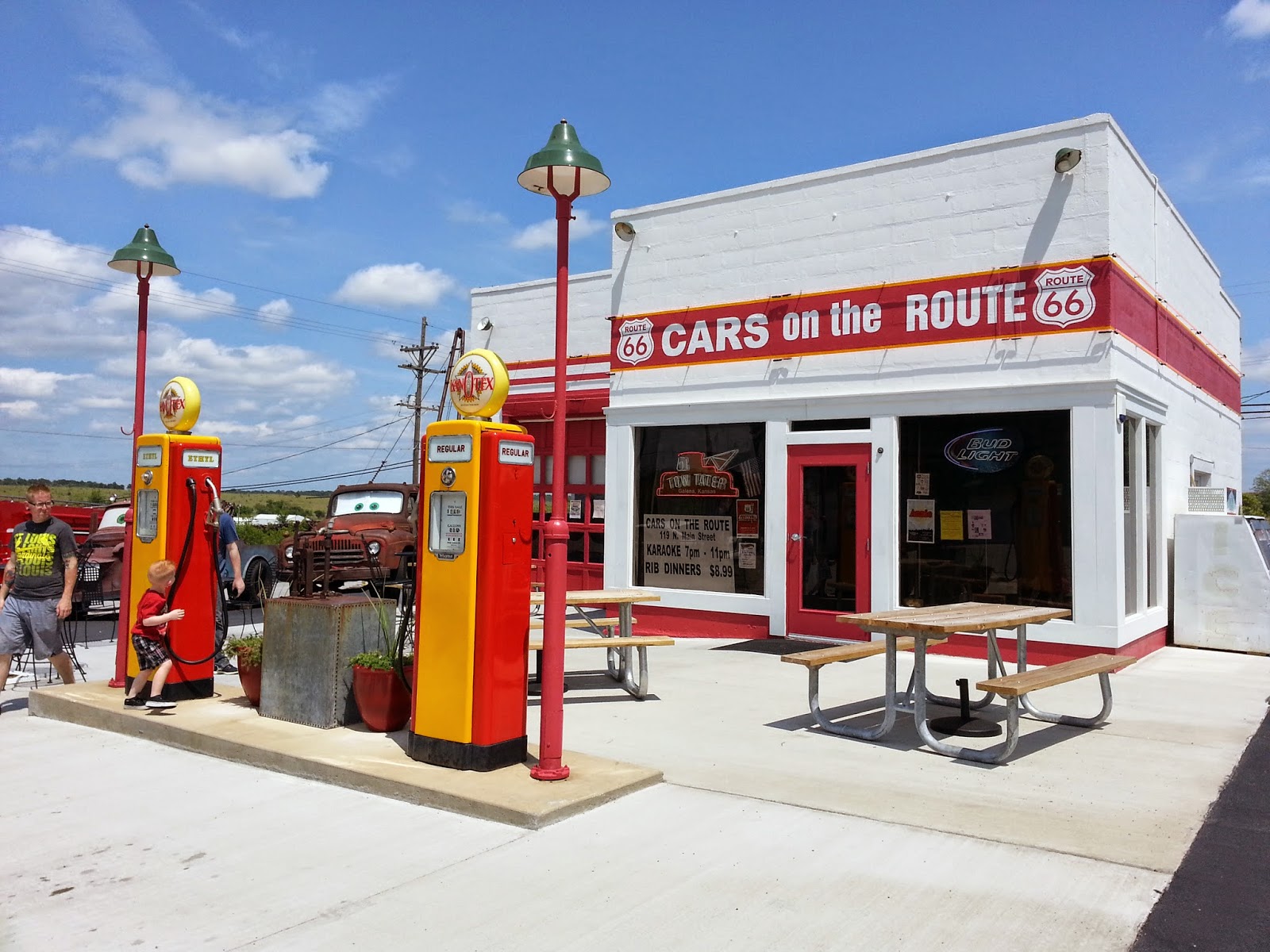 On to Riverton, a tiny town with a big power plant, and a stop at the Eisler Brothers Old Riverton Store was in order. Love this little store. It reminds me of the store in the tiny hamlet of Orfordville, Wisconsin, where my grandparents lived many years ago. This one in Riverton was established in the 1920s. Scott Nelson purchased it in 2011 from the Eisler estate and has kept the integrity of the store's vintage appearance. Canned goods, a few loaves of bread, some crayons and notebooks, snacks, and a little dust pile the old-fashioned shelves. A meat counter stands at the back and another room is packed with Route 66 souvenirs. Outside, hanging pots and flowers are for sale. Every town should still have a store like this. Unfortunately, it's one of a dying breed. 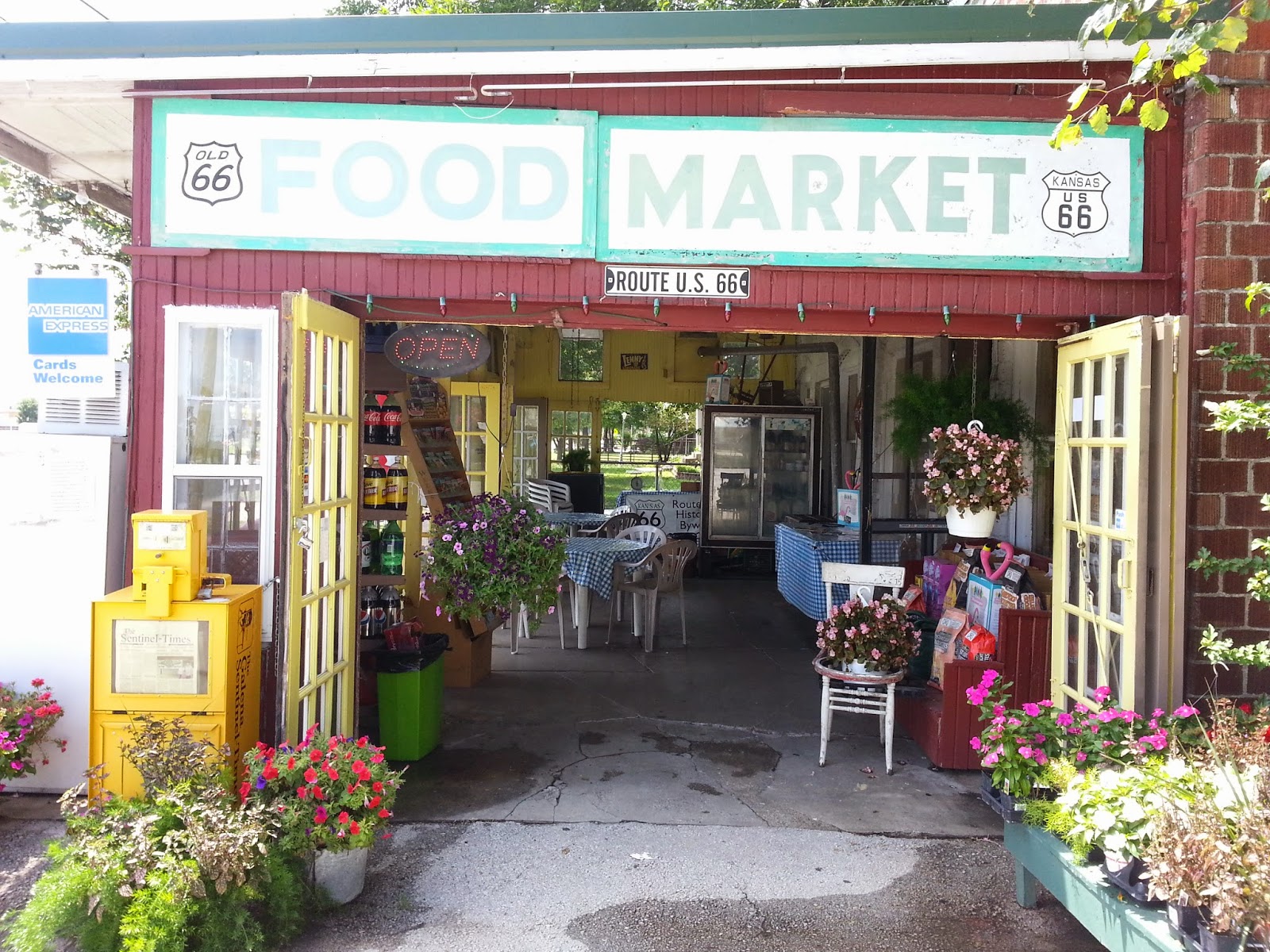 Next stop - the lovely "Marsh Rainbow" bridge over Brush Creek. This is the last remaining of three designed in this graceful shape by architect James Barney Marsh in 1923. 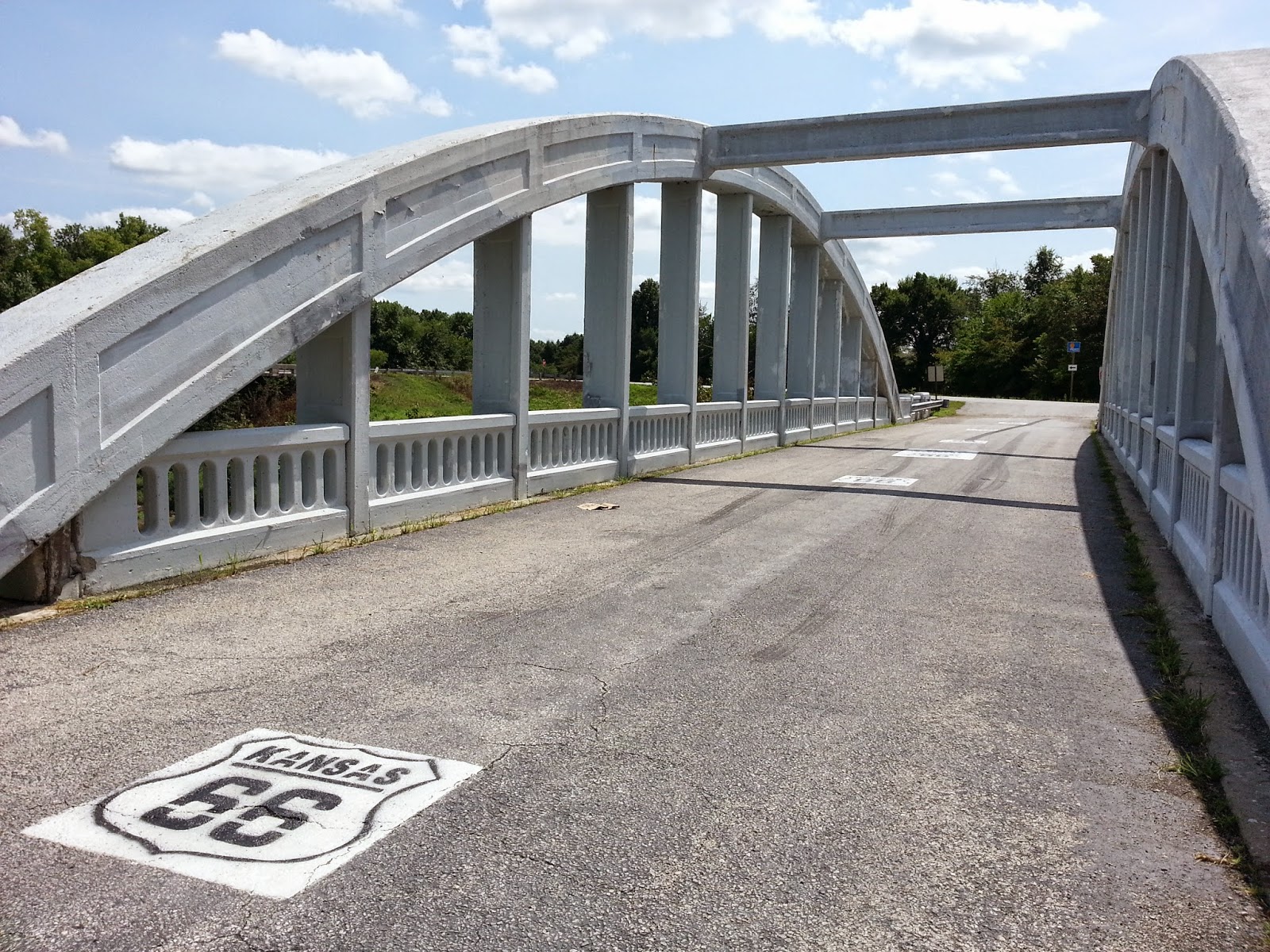 Baxter Springs concludes your tour of Kansas Route 66 westbound. A nicely restored gas station serves as the visitors center, some of the storefronts have been beautifully restored, and a fine Route 66 soda fountain sign graces one location that has, I believe, never opened. 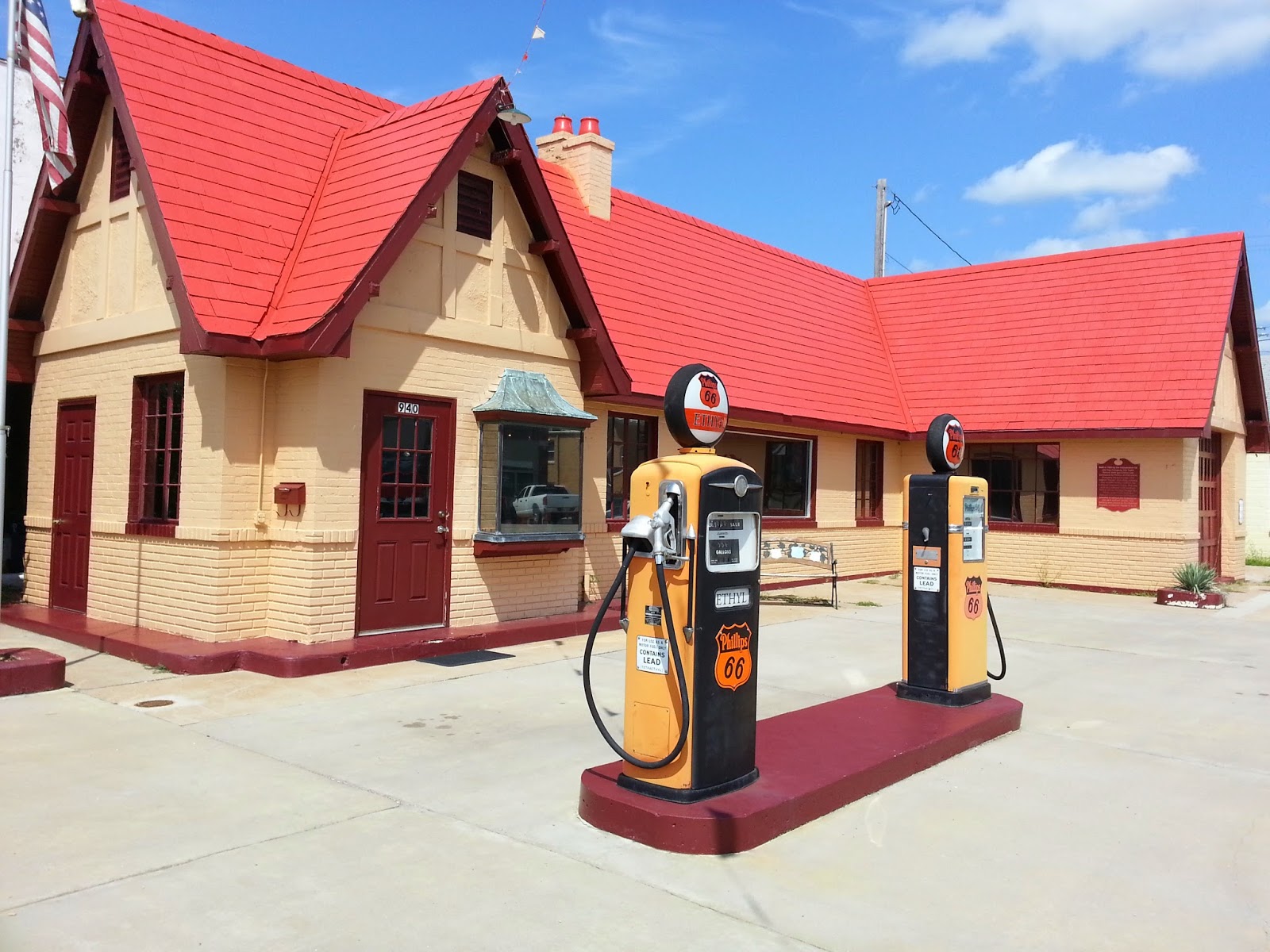 Into Oklahoma, I stopped in Miami (that's Miam-uh for you non-Oklahomans) for another look at the fabulous Coleman Theatre. Dear friend Cindy Reinhardt and I stopped for a nice long tour here a couple years ago, and a theater of this quality and size in a city no bigger than Miami (Miam-uh) is amazing. Mr. Coleman made his money in coal and oil and gave back to the city by building this showplace. And it has a great Wurlitzer organ in it! 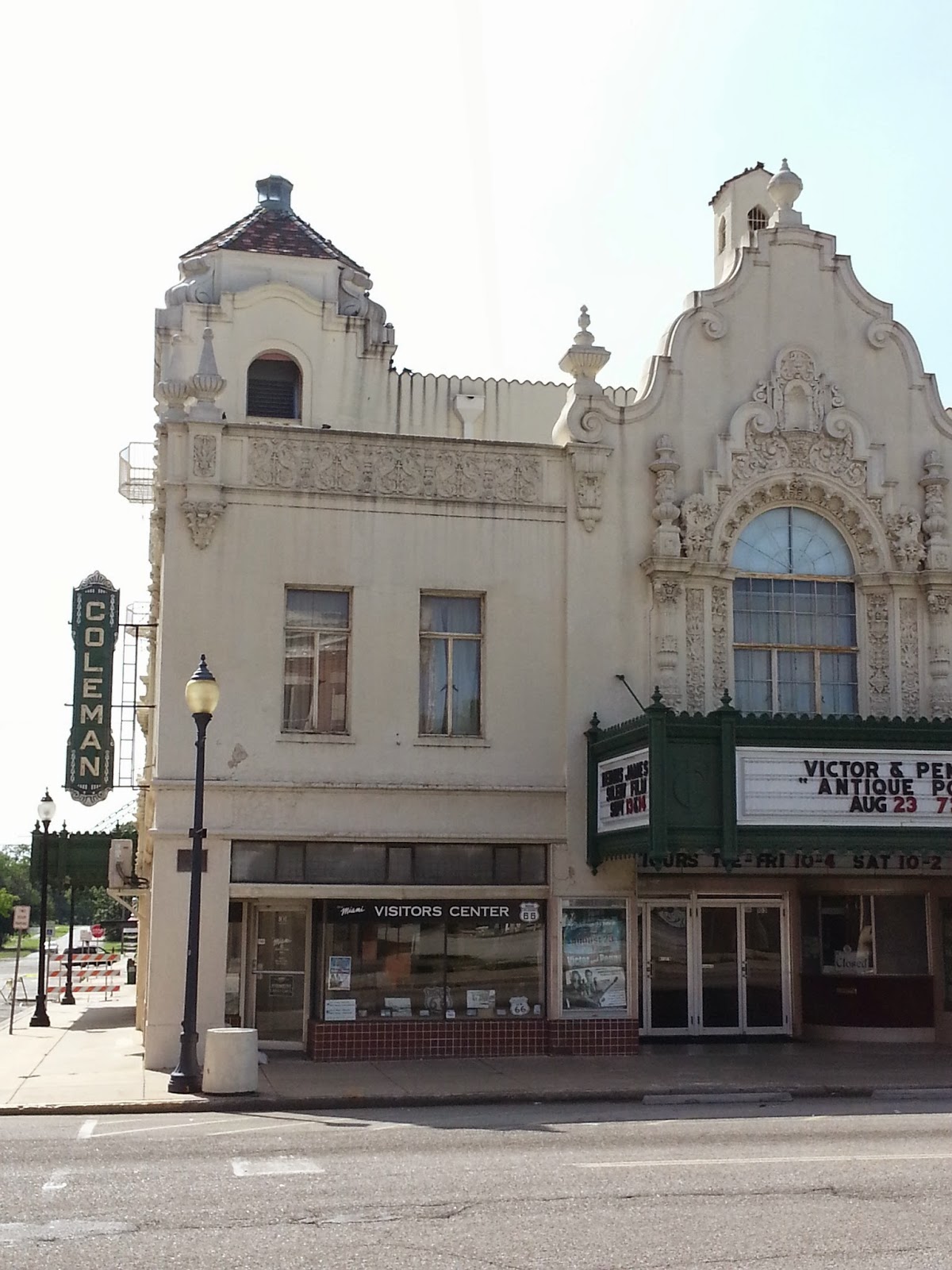 Next, the "Sidewalk Highway." My Prius probably doesn't like old roads like this as well as my old RAV4 did, but she's a little trooper, and we did just fine. The "Sidewalk Highway" was built in 1922 as one 9-foot-wide paved lane of highway and served as Route 66 until 1937, making it one of the earliest sections of the route to be bypassed. 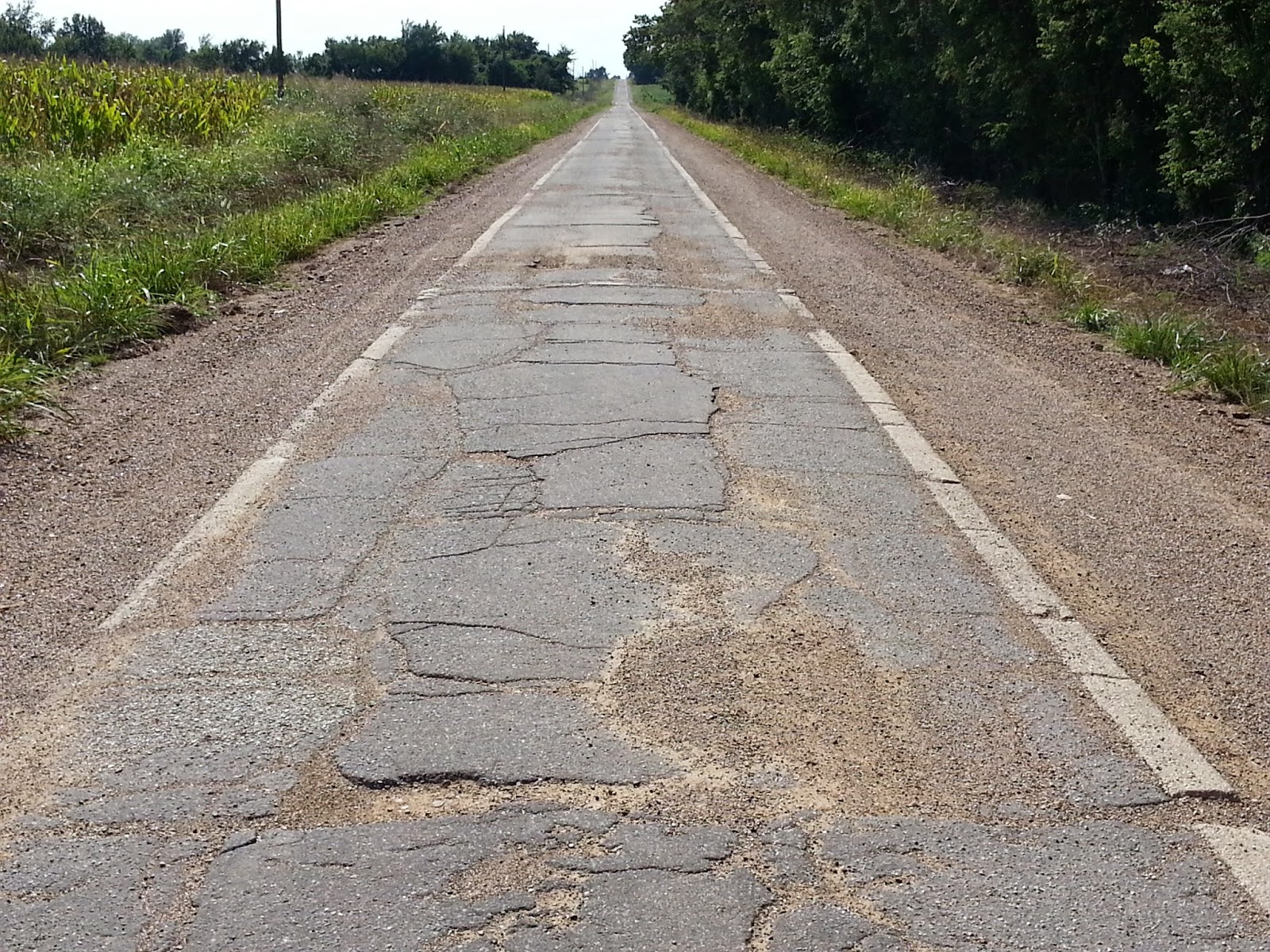 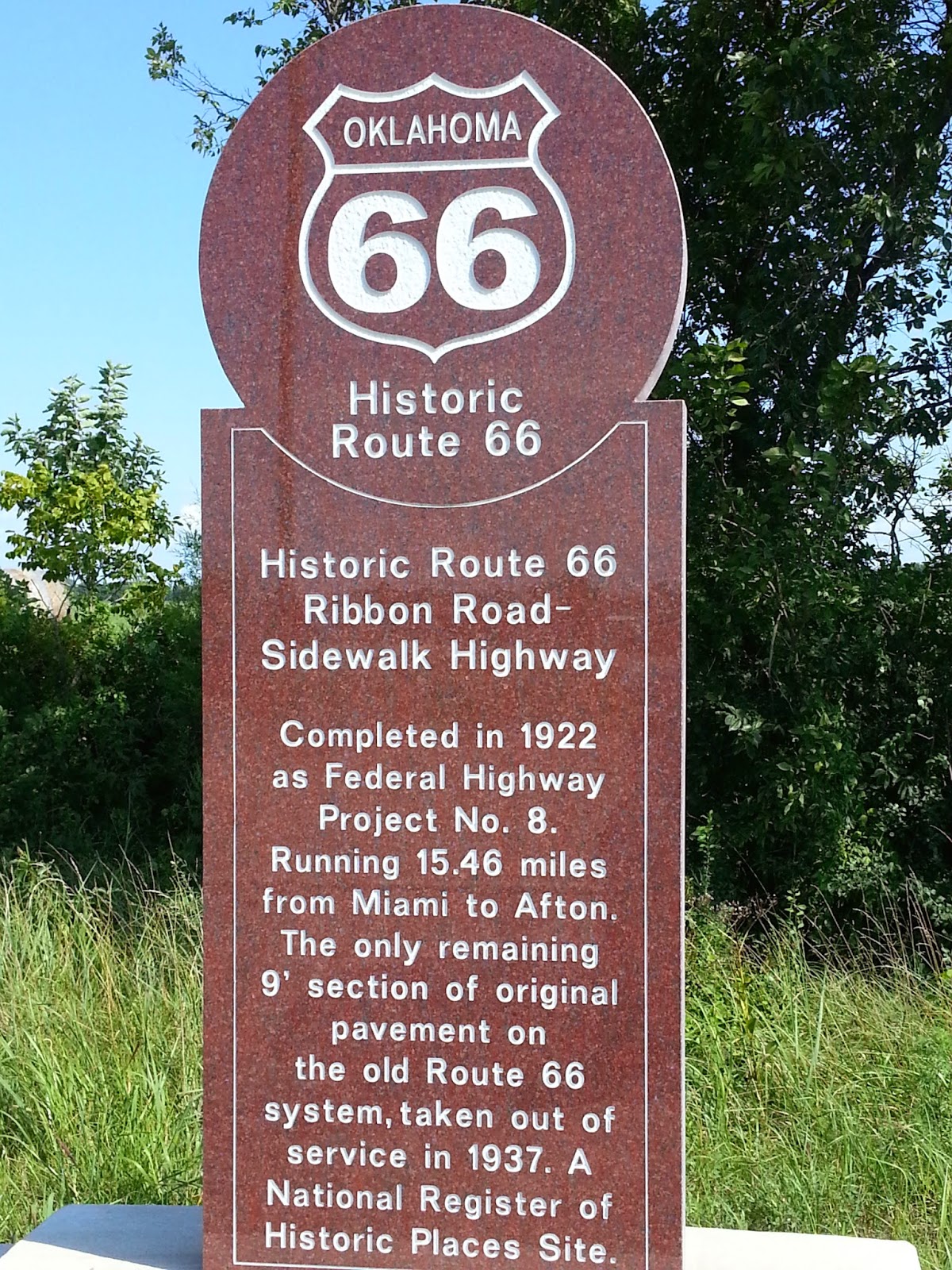 To stay on schedule to arrive on time in Kingman for the upcoming Route 66:  Crossroads Past and Future Festival, I had to skip some big chunks of Oklahoma and get on the interstate. (More on the festival soon!) Yeah, it happens to the best of us.

(Note:  Again, posting on the next morning.)