June 2017 Route 66 events and adventures with the new van

- July 14, 2017
With the 2017 Route 66 event season in full swing, my pertussis quarantine over, and an itch to go places in the new van, June proved to be a busy month. Between St. Louis and Chicago, I gave a program, attended a program, went to the Route 66 exhibit at Missouri History Museum twice, drove across the Chain of Rocks Bridge, sold and signed books, and, with my BCC colleagues, produced the third annual Blue Carpet Corridor festival weekend.

Here's a brief rundown of my June:

June 1 - At Jubelt's in Litchfield, I met up with Bill Kelly, Executive Director of Illinois Route 66 Scenic Byway, and Dave Tucker, Vice-President of Blue Carpet Corridor, for hand-off of materials for Blue Carpet Corridor weekend. Lunch was terrific as always at this long-standing cafe-bakery.

June 4 - I drove to Greenville to record a podcast for Creekside with Don and Jan at Owl Creek with the lively and fun Don and Jan Stover. We talked Route 66, the upcoming Blue Carpet Corridor event, and my new van. At their invitation, I stayed to record a second podcast for their members-only group.

June 6 - My storyteller friend, Mary Garrett, met me at the Missouri History Museum. We had a long-overdue visit and lunch, and enjoyed the fantastic Route 66 exhibit together. 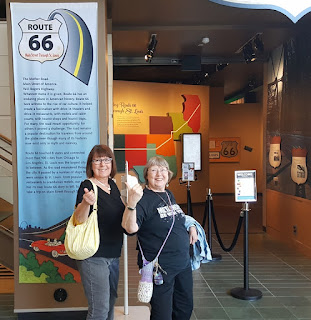 June 7 - Alice the van and I headed to Inlad Van in Lombard for the installation of the eco-friendly, wind-driven Flettner Ventilator in the roof/ceiling. Those Brits are so clever about their caravans and I was happy to find this available in the U.S. Inlad Van has a very efficient and knowledgeable staff. When they encountered a slight problem locating the right place for the roof opening, they puzzled it out for a satisfactory solution. I was there a little longer than I anticipated, but then headed south to Pontiac, where I met up with Joyce Harbin Cole at her Home Again Gifts at the Pontiac Museum Complex. Then we enjoyed a very good dinner at La Mex with Joyce's boyfriend Jeff Lewis. It was a late night as I drove back to Edwardsville after dinner. 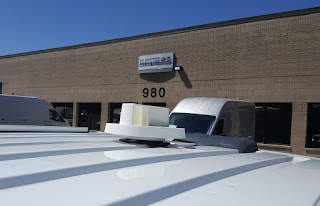 June 9 - The final meet-up, hand-off, and meeting of the minds for Blue Carpet Corridor occurred at Weezy's Route 66 Bar and Grill in Hamel with BCC VP Dave Tucker. We got a good look at the Route 66 Royalty Blue Carpet Corridor Car Cruise traveling trophy on display at Weezy's. It's a tough job eating meals and meeting up with like-minded people at all these great eateries on the route, but you know someone has to do it. 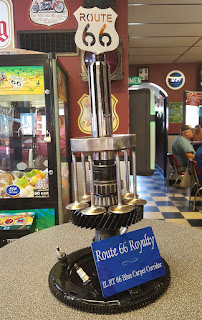 June 10 - The third annual Blue Carpet Corridor festival weekend finally got some good weather this year! Visitors from about a half-dozen states motored from one town to the next to get their souvenir passports stamped and enjoy attractions along the various alignments. I was located all day at the Edwardsville Passport Stop with Cindy Reinhardt, Edwardsville historian and author, who gave Route 66 walking tours, and Jo Ann Kargus with her very cool new Route 66 adult coloring book. The third annual Blue Carpet Corridor Author Fair added another five authors to the festivities. Lu Ann Locke, Afterwords Books owner, graciously hosted us all as we set up tents and tables on her front lawn. 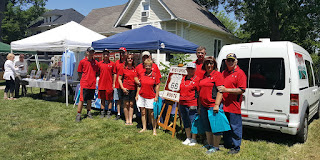 June 11 - Steve Rensberry and I drove over to the Missouri History Museum for him to see the Route 66 exhibit and for us both to attend Jim Thole's excellent presentation on Route 66 Neon. Author Michael Wallis was there, on tour for his new book, and it was good to say hello and chat briefly with him.

June 12 - I joined the Route 66 Association of Illinois annual Motor Tour for the last leg of their 2017 tour, crossing the historic Chain of Rocks Bridge. What a thrill! After the drive across, there was an opportunity to chat with numerous friends before the tour left for Ted Drewes. 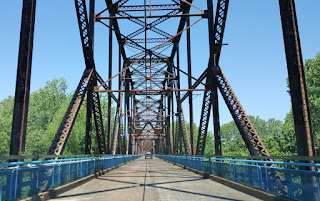 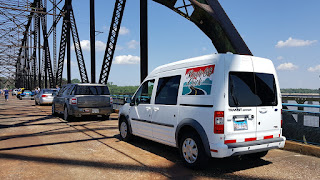 June 13 - In Springfield, Illinois, Michael Wallis presented a reading from his new book The Best Land under Heaven:  the Donner Party in the Age of Manifest Destiny and signed copies afterwards. It was great to see and chat with Michael twice in one week! It was a thrill to hear Michael read from his new book. This event was held at the Wyndham Hotel and was well attended by Michael Wallis friends and fans, including Rhys Martin (traveling with Michael), Bill Kelly, Geoff Ladd, Nick Adam, Penny Black, Scott Walkington, and the Friedrich family. 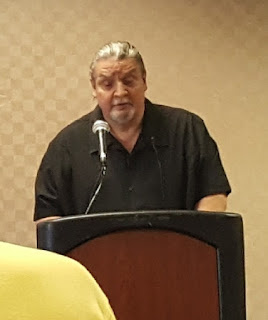 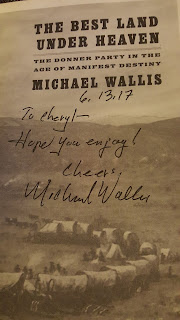 June 22 - I drove to Springfield for the bi-monthly meeting of Illinois Route 66 Scenic Byway (I'm on the board of directors). We had a productive meeting and the usual delicious buffet lunch at Mario's.

June 24 - An interview with the new owners of DeCamp Station (formerly DeCamp Junction) was on my schedule. They have great enthusiasm for their new venue and are excited about welcoming Route 66 roadies! I wrote my July column for the Buzz about DeCamp Station and you can read it at  www.thebuzzmonthly.com. 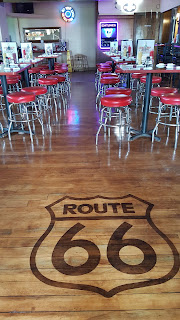 June 25 - 26 - Steve's birthday and mine are back-to-back days, and we celebrated with a couple dinners plus a very fun evening at the St. Louis Shakespeare Festival in Forest Park, St. Louis.

Jun 28 - At the Ariston Cafe in Litchfield, I presented my program, "Route 66 in Illinois," for a good-sized group of cruisers from the GTOAA Nationals 2017 convention in Springfield. It was fun making sure I included plenty of trivia answers for the questions they were going to have to answer during the rest of the cruise. 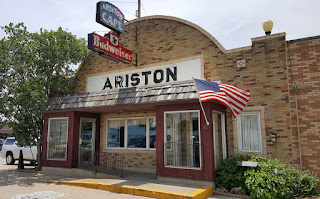 June 29 - Illinois Route 66 Scenic Byway set up a booth in the lobby of the Crowne Plaza for several days for the GTO Nationals 2017 convention, and shared said booth each day with one or more tourism groups, or on this particular day, with an author who brought a stock of her books and sold and signed. It's always fun to spend a day with Route 66 friends, and it was good to see Dean Kennedy and Judy and Richard Walker, who had made the trip to display their booth full of cool Route 66 merchandise all week. 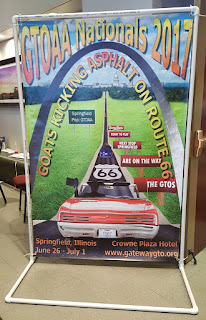 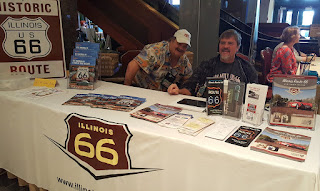 July 30 - I got up extremely early to drive to Bloomington for an early-morning meeting of the Red, White, and Blue Carpet Corridors. And on the way home, I made my second stop of the month in Atlanta -- this time for lunch. And pie. 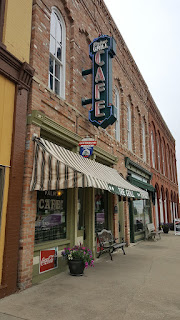 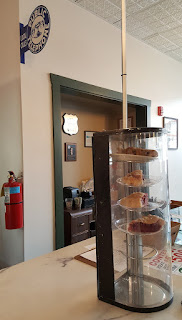 And in between, I finished up articles and worked on programs and the new book. Whew. And made some more enhancements to Alice the van! (More on the van modifications coming soon!)
#AliceMyVan Ariston Cafe Blue Carpet Corridor Chain of Rocks Bridge Flettner Ventilator Illinois Route 66 Illinois Route 66 Scenic Byway Jubelt's Michael Wallis Route 66 Weezy's