Why is the Blue Carpet Corridor BLUE?

- May 02, 2019
Every year, leading up to and during the Blue Carpet Corridor/Miners, Mobsters, and the Mother Road passport weekend, I get asked, "Why is the Blue Carpet Corridor BLUE?" It's a fair question, especially when the old saying specifies RED, as in "rolling out the red carpet." Route 66 fans that are aware of the annual Illinois Red Carpet Corridor event (which is mostly everyone) have this figured out. But for anyone new to a Route 66 addiction, not familiar with Illinois, or just wanting an explanation, here's the story! 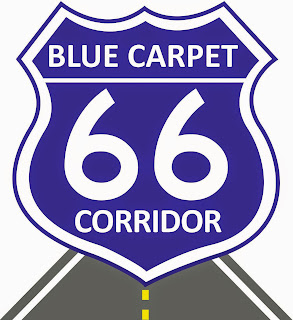 The state of Illinois can claim approximately 300 miles of Route 66, and for event and marketing purposes, it's sometimes regarded as having three distinct "corridors." Each corridor has its own local flavor. The Red Carpet Corridor in the north end of the state was once distinguished by its industrial economy, such as in Joliet and at the World War II-era munitions plant at Elwood, and by its gangster activity prevalent in the 1920s. The White Carpet Corridor in the middle of the state is known as the Land of Lincoln as well as the land of endless Midwestern prairie. The Blue Carpet Corridor south of Springfield runs along a once-rich vein of coal mining, that route once being dotted with gangster stills and hang-outs.

About 15 years ago, Illinois Route 66 preservationist John Weiss and Pontiac's first Tourism Director Betty Estes had the same idea - create patriotically-named red, white, and blue corridors along Illinois Route 66. The first annual Red Carpet Corridor event was held in 2007, with another successful event produced each year thereafter on the first weekend in May. This year the thirteenth annual Red Carpet Corridor event will be held this coming Saturday, May 4th.

The Blue Carpet Corridor was established in 2014 under the leadership of then-Director of Carlinville Tourism, Stan Barker. Sadly, Stan passed away soon afterwards and I was asked to consider serving as president. The Blue Carpet Corridor Coalition became a nonprofit organization, and our first event was held on the second weekend of June 2015. This year, for the fifth annual special weekend, the event has moved to the third weekend in May.

Some communities and/or passport stops will have refreshments, historical tours, souvenirs, book signings, open museum or historic site hours, or other activities and attractions. Go to Blue Carpet Corridor for details on our events and information on all our participating communities.

And that's why the Blue Carpet Corridor is blue!