- May 30, 2014
The Litchfield Museum and Route 66 Welcome Center at 334 Historic Old Route 66 North (across the road from the Ariston Cafe) in Litchfield, Illinois, is celebrating its first anniversary on Sunday, June 1, from 1:00-4:00 pm. The museum invites everyone to come join them for the celebration, with new attractions, special music, vintage automobiles, door prizes, and refreshments. 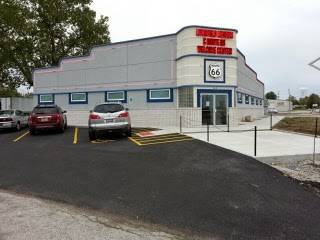 The museum and welcome center opened a year ago after many months of planning, design, and construction. Construction of the building was followed closely by Litchfield residents driving by the site and by Route 66 fans around the world via social media. The building was designed by John Fletcher to be reminiscent of Route 66-era service businesses with a corner entrance and plenty of neon. Carol Hampton Berry is credited with the floor plan for the building and United Builders/Larry Pence did the construction.

The “Vic Suhling – Gas for Less” sign, appropriately situated in its original location was completely restored in 2013 and a large crowd attended the relighting ceremony in October.

The original idea for the museum sprang from a meeting of Anne Jackson, Martha Jackson, Carol Burke, and Chick Bishop in April of 2011 at Litchfield City Hall to discuss putting together a postcard book. The group's website tells the story as follows, “Anne's father, the late David A. Jackson, had an extensive collection of postcards depicting Litchfield's rich history. One short hour later, the postcard book was only a small part of the equation. The four decided to try to rally Litchfield citizens and pursue the idea of developing a museum in Litchfield.”

David A. Jackson had been editor of Litchfield's newspaper for many years and was an avid collector of Litchfield items and memorabilia during his lifetime. After his passing, his family created displays of his photos and artifacts on the second floor of Litchfield's Carnegie Library. A small group began to meet regularly in May 2011 to pursue the dream and begin planning for a Litchfield museum. Soon officers were elected and other museums were visited for ideas. The Litchfield postcard book was printed and became the first fundraiser. Bylaws were written and land – on historic Route 66 – was purchased. And the seed was planted to give Litchfield's Route 66 history its due - the Litchfield Museum and Route 66 Welcome Center.