- December 10, 2014
Promptly at 12:10 p.m. yesterday, we (crew, other passengers, and yours truly) left the ABQ station and headed north out of the city on the Southwest Chief. The tracks run parallel (just a few blocks away) with the pre-1937 Route 66 alignment/4th Street corridor. My visit was too short this time but it was the best I could fit in right now with all the projects I'm juggling. 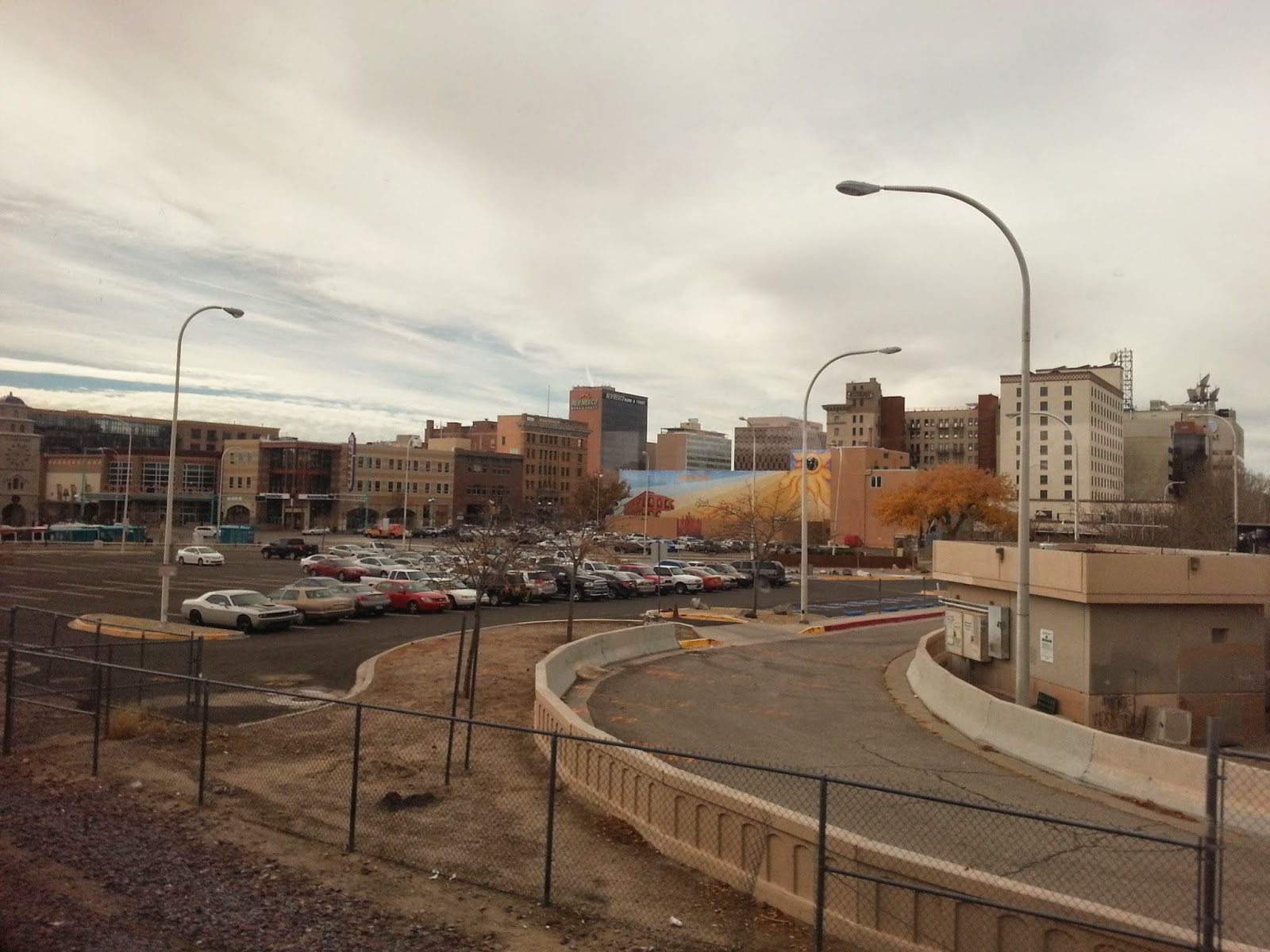 Train travel is always teeming with humanity in all our glorious diversity. A cross-section of America – age, gender, ethnicity, socio-economic status, and hairstyle – travels Amtrak. Just an observation, not a commercial.

On the coaches, stockinged feet, pine-tree-patterned blankets, children's toys, overstuffed tote bags, and sometimes a lolling, sleeping head stick out into the aisle from seat and floor. Train staff try to keep people and their stuff corralled back into the seat spaces, mostly in vain.

Actually, this afternoon I made a note to travel on Tuesday more often. There were not many passengers to disturb as I popped across the aisle periodically to take photos of what was on the other side. Mountains, some high plains, bosque, red rock, sky. It's all good. Magnificent scenery is good for the soul. (FYI, all photos taken through dirty train windows.) 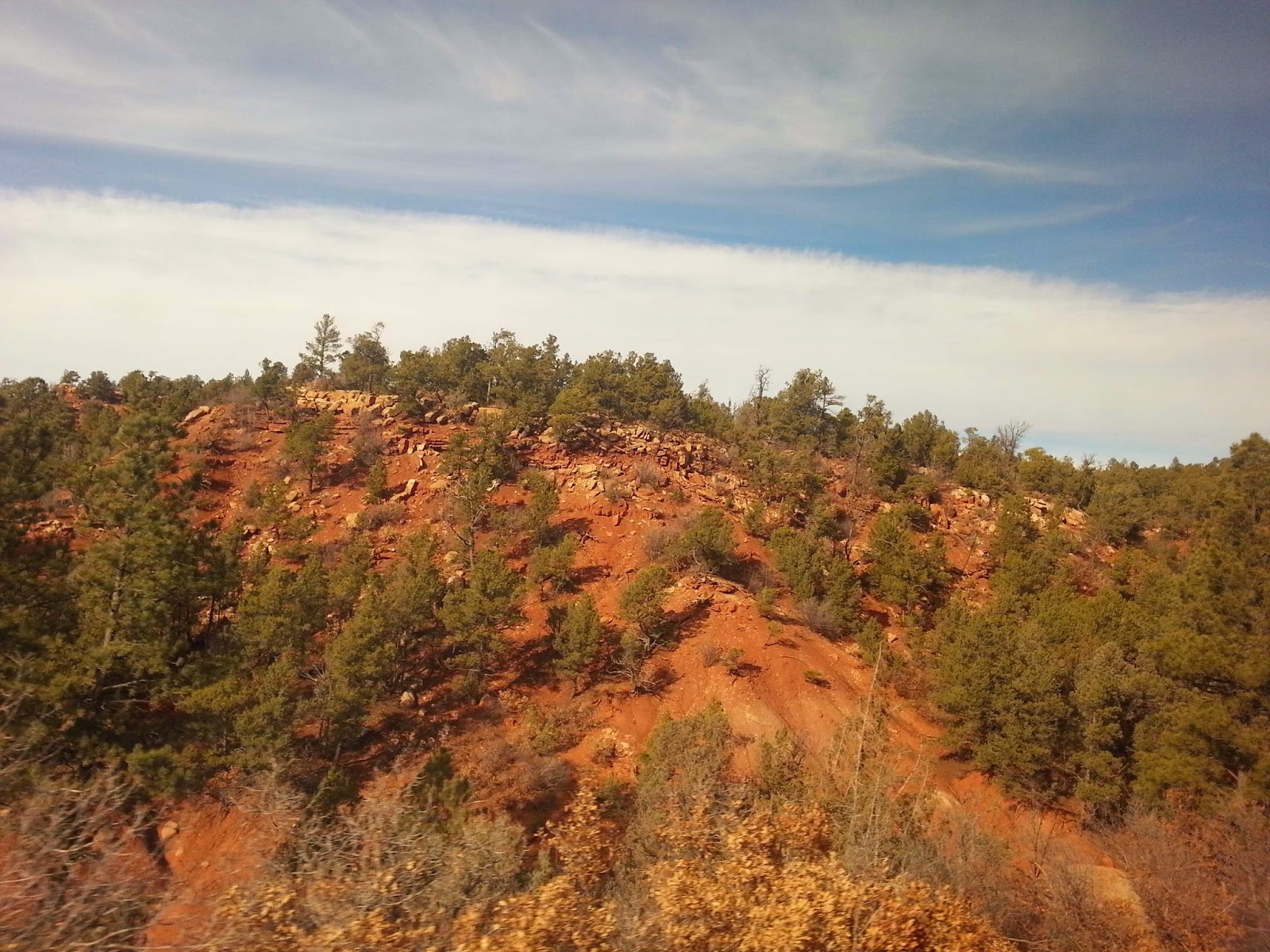 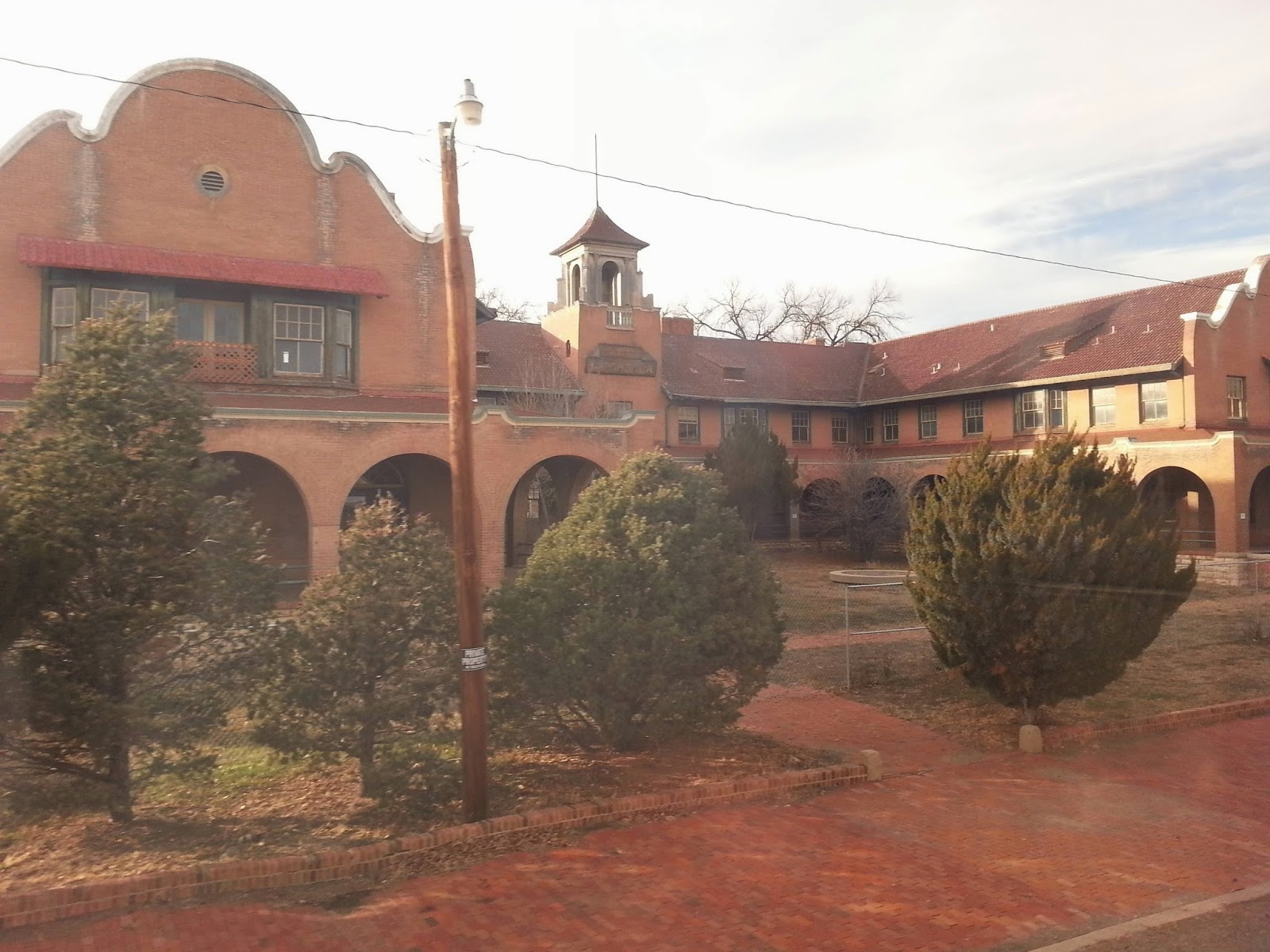 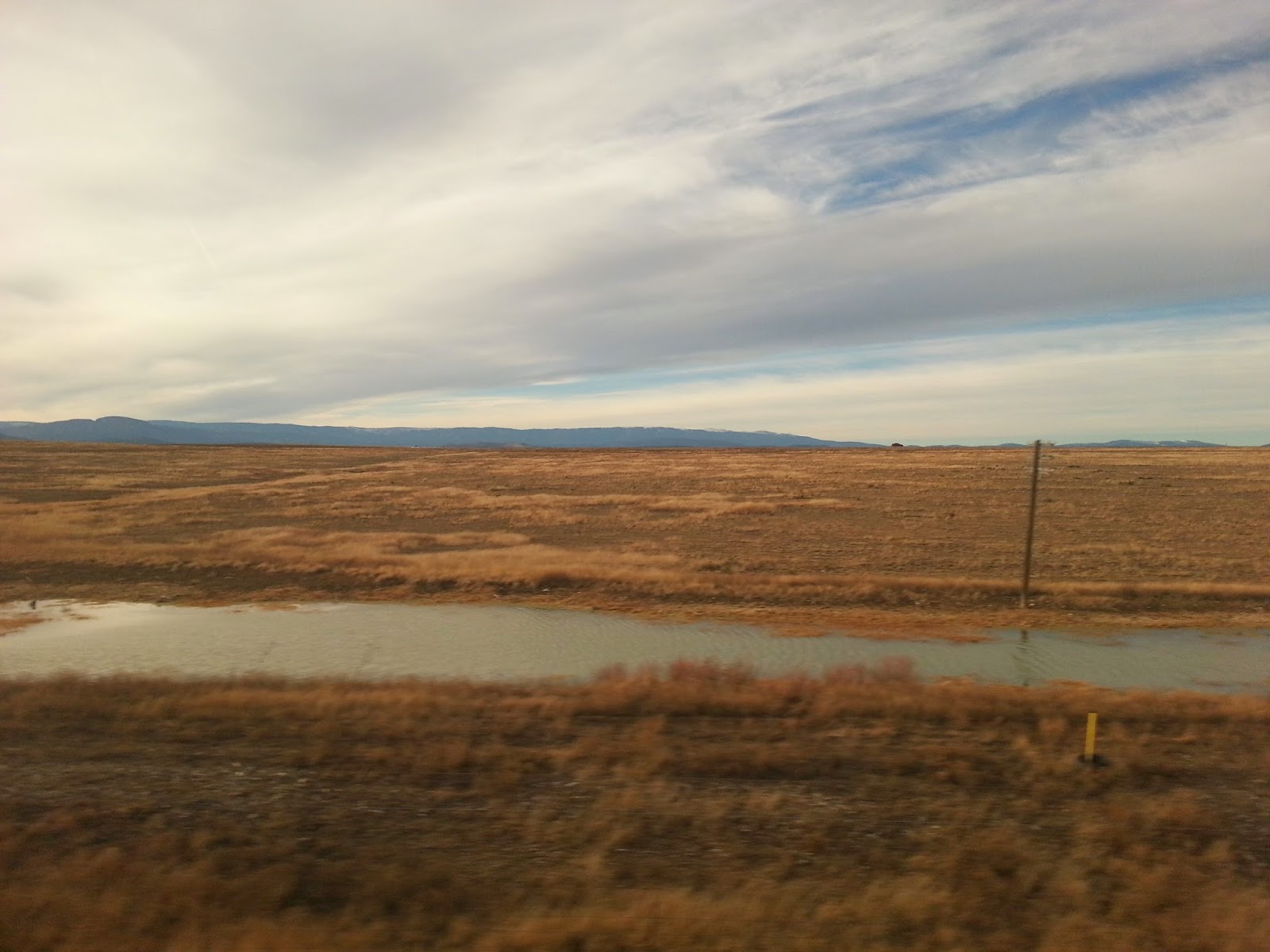 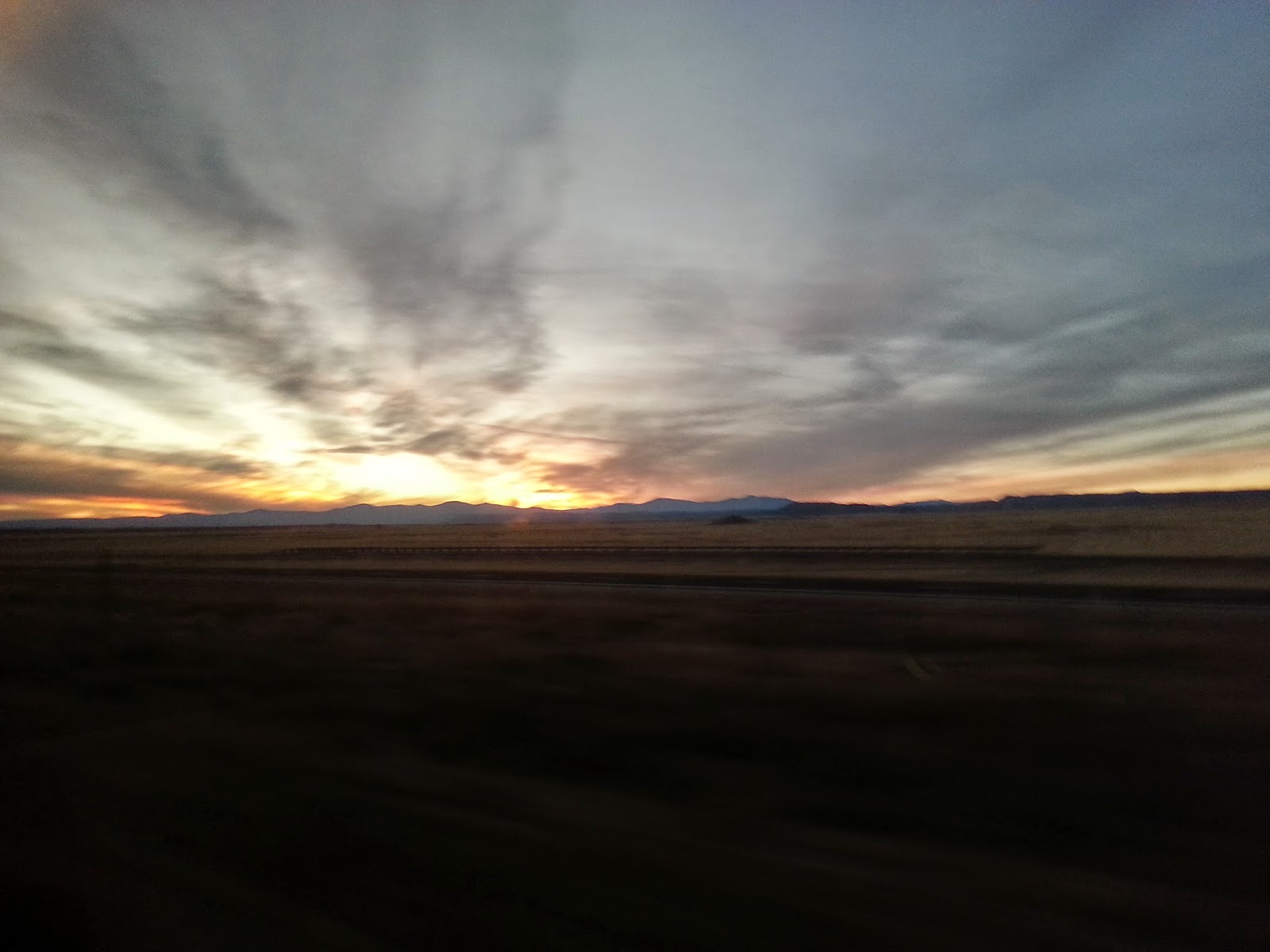 Back to the train, I'm always fascinated by the things that people bring with them – besides the requisite headphones, electronic devices, blanket, and pillow. Over the years, I've seen musical instruments of all sorts, small dogs smuggled onboard, large framed art, plants, you name it. On this trip, one woman reclined, sound asleep, with her large size container of cottage cheese firmly within her grasp. In the lounge car, young men with guitars were alternately strumming and discussing the meaning of life with a couple more persons. One woman sported an amazingly large and brushy ponytail of salt and pepper hair.

If you've never experienced the dining car on a train, you should do so sometime. It's just a ghost of what it once was, but you can get the general idea. You make a reservation, just like in a restaurant (but you can't use Open Table). If you are traveling solo, you are seated with other singles or a couple who, of course, are total strangers. Most everyone exchanges introductions and their line of work, although a few times I've been seated with someone who was interested only in food. I've met a submarine designer, other writers, professors, retired people whose business it is to travel as much as possible, and passionate young people ready to bend the world to their notion.

My dinner companions yesterday evening were a retired couple from Arizona (career military and a physical therapist) and a musician from Albuquerque who had been in the recording studio two nights previous with a friend of my musician daughter's. It's definitely a small world. The four of us had good conversation about music, musicians, travel, universities, health/fitness, and Route 66 (hard to believe, I know.)


Then it was back to my seat in coach to write and doze. The velvety darkness rushed by, punctuated only occasionally by a few lights as we headed east through the Colorado plains. Of course, I had my electronics and a few snacks with me. But as much as I travel, I've got my packing fine-tuned to one lightweight bag when I go by train. And no, I don't bring cottage cheese.