- August 24, 2015
Two weeks ago today, I had the pleasure of meeting my brother's son and his wife for the very first time! (I had never known my brother.) Jim and Ramona Tennison were in Illinois for a granddaughter's wedding and made a stop in Edwardsville for our delightful family reunion. I've decided to share the story of how this happened...almost a fairy tale, but it's all true. Here goes...

On November 28, 1892, Gene Eichar was born in Clarksville, Iowa. Gene and his older sister, Hazel, showed a talent for music early on, and by the time they were in their early teens, they were performing at their local theatre. At the age of 14, Gene went on the road, playing piano for silent movies. When the “talkies” came in, he switched to vaudeville and played with the likes of Jimmy Durante and Jack Benny. All his life, Gene would say, “The only difference between them and me was they got famous.”

Gene married young, and he and Lucy had two children, a boy named Grant in 1915 and a daughter named Clover in 1917. But the marriage didn't last, and Lucy reared the children in Elgin, Illinois, while Gene went back out on the road.

Gene's sister Hazel had married Clem Field, an Iowa photographer, but Hazel had died in her late 20s from respiratory disease. Clem had gone to California to put his talents to work in the Golden Age of Hollywood. Clem was a stills photographer in one of the motion picture studios and urged his brother-in-law, Gene, to come out. Gene did go to Hollywood for awhile. He had gotten interested in dance as well as music, and attended the famous Fanchon-Marco School of Dance http://www.fanchonandmarco.com/Home_Page.html to become a dance instructor. Back in Chicago, Gene attended the Jack Manning Teaching Tour https://en.wikipedia.org/wiki/Jack_Manning_(actor) to further hone his dance/instruction skills. Sometime and somewhere during this time period, Gene met and married a woman named Fern, also a dancer.

Gene and Fern established a school of dance and music in Beloit, Wisconsin, named, oddly enough, the FernandGene Studio. But their marriage didn't work out, and they were soon separated. In November 1936, a lovely young woman named Charlotte Hanson was working in Beloit. Charlotte came from a Norwegian farm family in the Orfordville, Wisconsin, area and was an avid musician and music lover, eager to learn as much as she could about music and dance. One fateful day that November, Charlotte signed up for dance lessons at the FernandGene Studio. If there is such a thing as love at first sight, I believe Gene and Charlotte experienced it. They married in January 1937 and embarked on a long, love-filled partnership of music performance, study, education, and eventually retail music stores, which took them to work and live in numerous different communities in Wisconsin and then Illinois. By the way, Gene was 27 years older than Charlotte.

Back in Elgin, Illinois, Grant and Clover had grown up. Clover married a professional drummer, with the last name of Cheverette. Grant had been an Eagle Scout and the American Legion “Boy of the Year.” He became a troop scoutmaster and a private pilot. By 1940-1941, although the U.S. was officially still neutral, young American men with flying skills were being recruited to fight based in Great Britain. Grant went, and became one of the 250 famed Eagle Squadron pilots. http://www.rafmuseum.org.uk/research/online-exhibitions/americans-in-the-royal-air-force/eagle-squadrons.aspx He was a member of the 133 Squadron and was one of the 78 Eagle pilots who were killed. Grant's plane was hit on July 31, 1942, and he went down in the English Channel.

Grant had been married to Maxine Elliott, and they had a son, Jim. Maxine remarried, to Emory Tennison, and little Jim was adopted and given the Tennison surname. (Grant was married two more times before he died at the age of 27.)

Gene and Charlotte Eichar, in the meantime, were teaching dance and music and eventually settled in Jacksonville, Illinois, where they planned to get advanced degrees in music education. Gene had had some serious musical instruction at the VanderCook College of Music in Chicago but did not have a degree. In Jacksonville, Gene and Charlotte attended MacMurray College while Gene taught at Illinois College! After achieving their bachelors and masters in Music Education, they had a daughter, whom they named “Cheryl” but always called “Chery,” causing confusion to this day about what that kid's name is.

Cheryl or Chery, however you might know her, grew up in Springfield and Litchfield, Illinois, and over the years attended Southern Illinois University, married, had two amazing children, worked in family businesses and a string of other jobs, taught music, played music, wrote cheesy fiction, went back to Southern Illinois University and got a master's degree, worked at the wonderful Cahokia Mounds State Historic Site, got published, and got bitten by the Route 66 bug.

Chery/Cheryl's two kids grew up, too. Since they are very private people (compared to their mother, anyway), the basics are: Thomas is a computer programmer and lives with his wife, Nicole, and their two amazing dogs in Florida. Erica is a music instructor and lives with her husband, Ethan, and their two amazing dogs (and several kittehs) in New Mexico. They have both worked as professional musicians.

Meanwhile, Jim Tennison grew up in Elgin, married several times and lived in different regions of the U.S., had two sons and a daughter, and had several careers, including newspaper reporter and professional photographer. Jim was musical, too – tap dance, piano, trumpet!

Chery/Cheryl, always the genealogist/historian/documenter of everything, thought occasionally of trying to find Jim, the son of her brother, Grant, whom she had never known. Last winter, it became a bit of an obsession and the search was on. Eventually, she found a Jim Tennison on Google Plus with one photo – of a young boy who looked an awful lot like young-boy photos of Grant Eichar. There was also a wife's name – Ramona Tennison. A Facebook search produced a Ramona Tennison with a Facebook friend named Jim Tennison. A click to Jim's page, and there on the laptop screen was the image of a yellowed newspaper clipping with a photo of Pilot Officer Grant Eichar!

Facebook chat and emails reached a surprised, maybe stunned, Ramona and Jim Tennison! The surname “Eichar” certainly had to be a blast from the distant past for them. Tentative conversation turned into a flow of information, memories, and hopes for a real, in-person meeting. The realization of those hopes occurred on Sunday, August 9, when Jim and Ramona Tennison (and dog Bonnie!) and Chery/Cheryl Eichar Jett and Steve Rensberry (who documented the meeting in photos) met at Chery/Cheryl's house in Edwardsville. 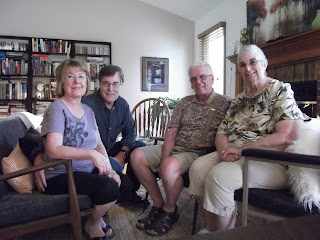 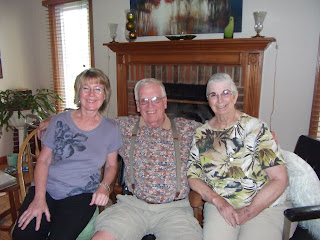 It was a very sweet Eichar Reunion, with plans for another visit in California in 2016. Steve (who is editor of the Troy Times-Tribune) was touched by the reunion and wrote about it as a human interest piece in his column in the August 13 issue. I loved his line, “I'm not a genealogist, but it's moments like these that make me want to be.”

This is a true story, and none of the names were changed. The moral? Love and family transcend generations, even when a generation is skipped or dies far too young. Never give up the search, if you have one to make.