- August 17, 2014
Saturday began with the e-group breakfast hosted by Mike and Sharon Ward, with plenty of food, prizes, and laughs. It was a great way to start the day.

Then it was off to the Artists, Authors, Collectors, and Associations Expo in Beale Celebrations event space for Joe Sonderman and me. There was a good crowd in the building for a good share of the day. Of course there were plenty of other diversions. Jim Hinckley gave out “awards” of vintage “bat guano” cans. Roamin' Rich Dinkela had a vehicle hood on display and solicited some more of us to sign it. We took turns out and about enjoying the rest of the festival. By all reports the festival with vendors and entertainment a couple blocks away at Locomotive Park was going strong. The historic downtown was full of people having a good time. 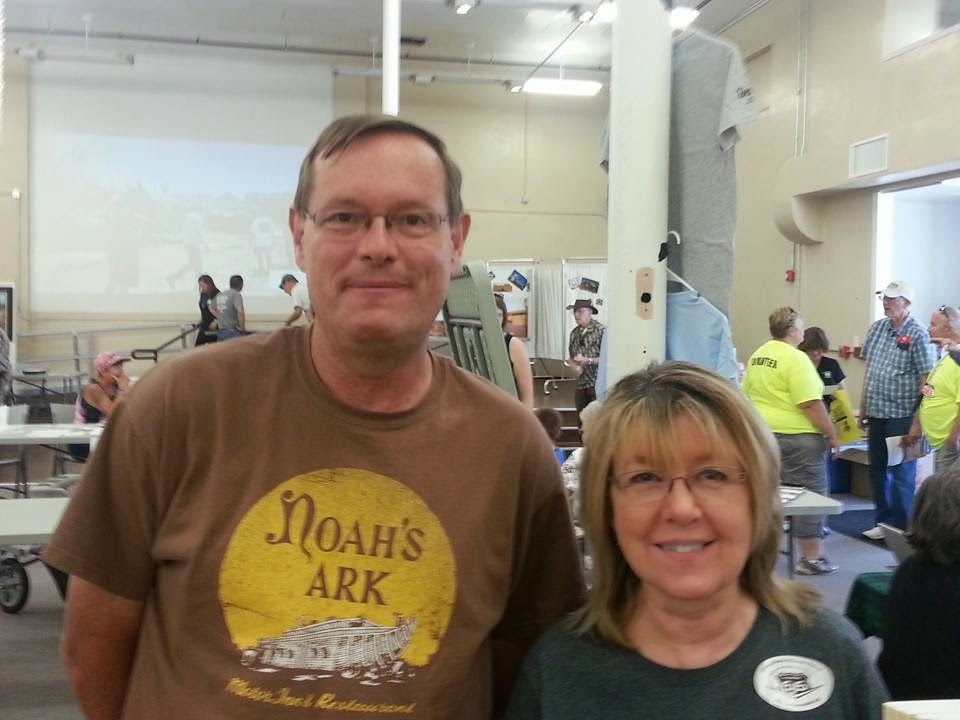 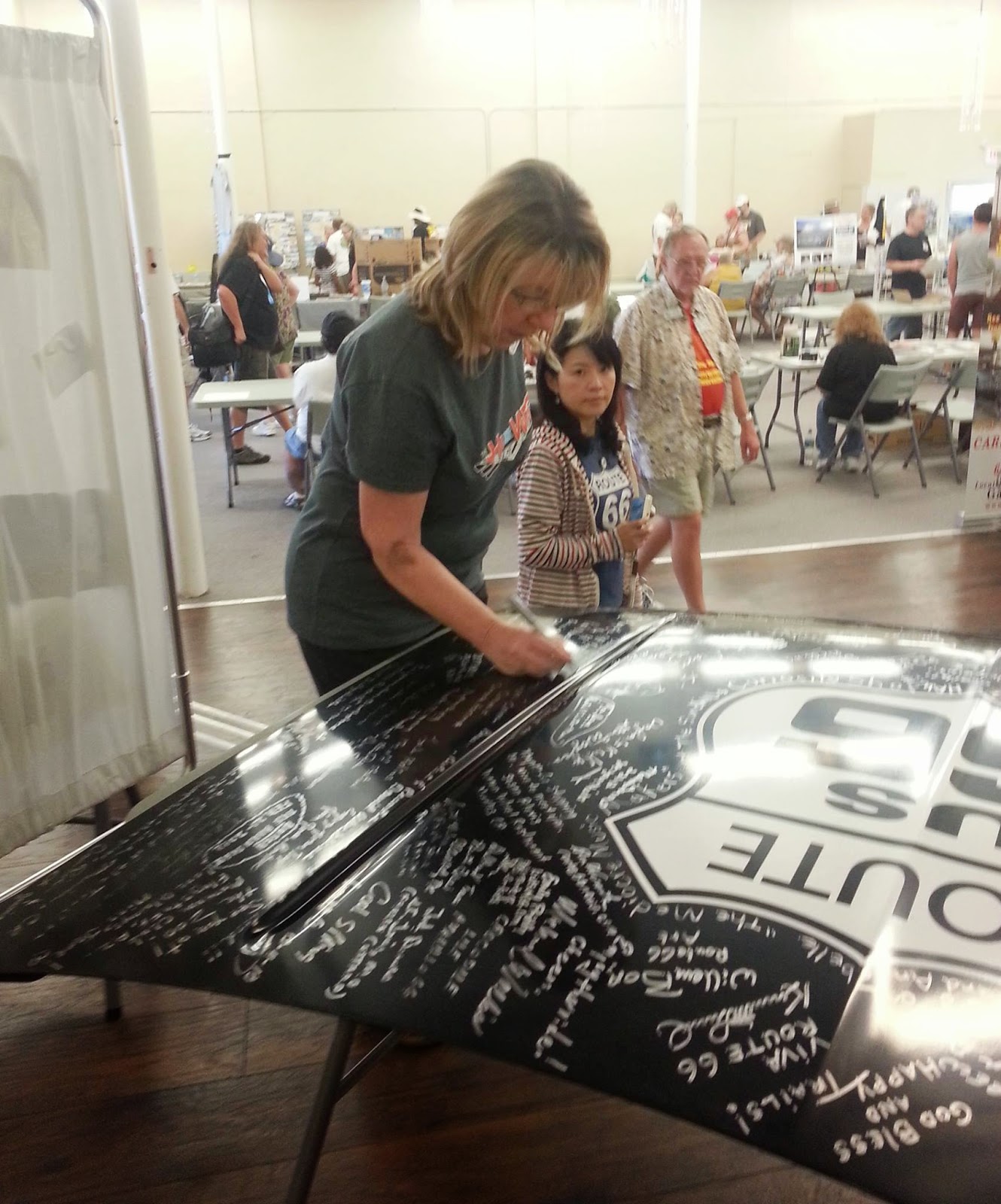 During the evening there plenty of choices for entertainment. Rich Dinkela and Kumar Patel threw a roadie bash. Various groups of visitors and roadies piled into the various downtown eateries (every restaurant that I tried during the weekend was excellent.) Everyone's favorite Route 66 band, Joe Loesch and the Road Crew Band from Nashville, took the stage in Locomotive Park. 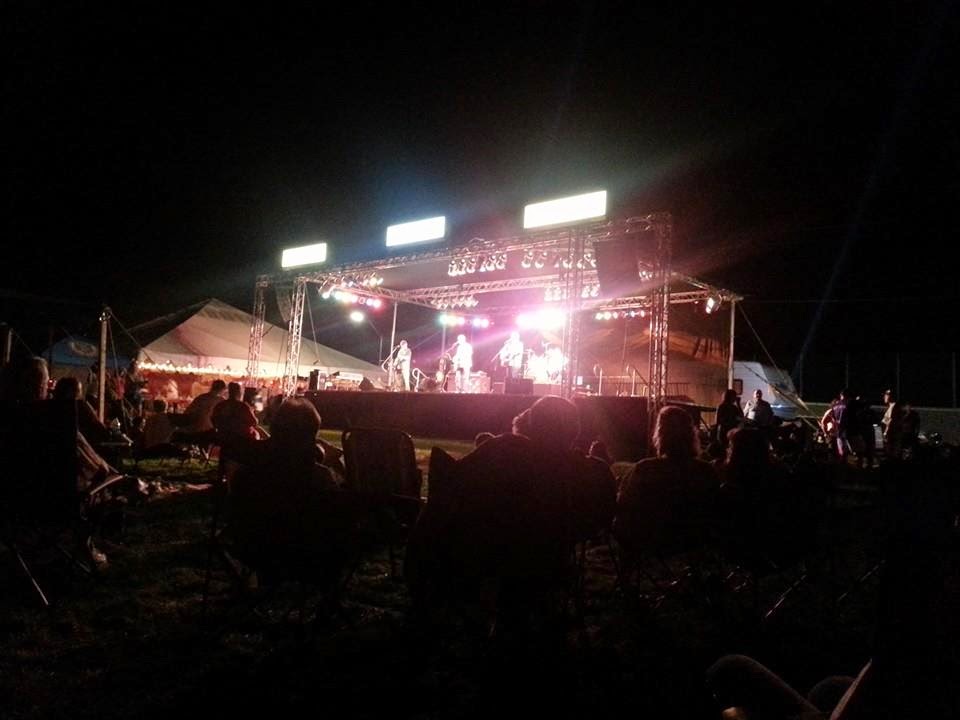 And then it was time to close out the evening. Event Director Dora Manley (who did an excellent job, by the way) took the stage for some closing remarks. She introduced Kingman author/photographer/tour guide/historian and event consultant Jim Hinckley, for his closing remarks. Jim then introduced me, and I had the privilege of announcing to the crowd that the City of Edwardsville, Illinois will host a Route 66 Conference on Halloween Weekend 2015 at the beautifully-restored 1909 Wildey Theatre! 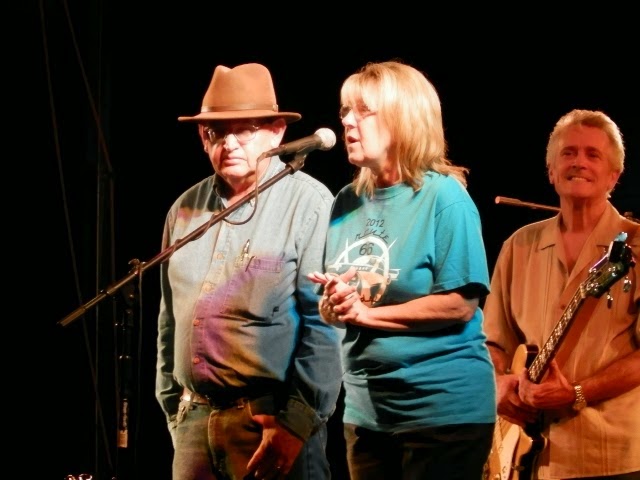 The Wildey Theatre on North Main Street, just off Route 66, serves Edwardsville as an arts and entertainment center and is also capable of hosting community events and conferences in its three full floors of theatre and meeting spaces.

Edwardsville has a long tradition of huge, themed Halloween parades. The parade was begun in 1924 and has been held annually since, except for a couple years during World War II. Huge crowds line the streets, and there have been a few years in which the attendance number was larger than the city population at that time! Can anyone guess what the theme of the 2015 Edwardsville Halloween parade will be?

The 2015 Edwardsville conference will build on the Anaheim conference of 2013 and the conference at the Kingman festival with the intent of continuing to foster a positive flow of information and dialog about running the business of Route 66, continuing to support preservation and promotion, and continuing to join the associations, the business leaders, the National Parks Service, the communities along the route, and others in a common cause.


The next couple months will witness some intense planning for the Edwardsville event, with a website and a Facebook page to come soon.
Edwardsville Kingman Road Crew Band Route 66 Wildey Theatre